Earlier this month, Kyle Hooker pulled onto the Piper Aircraft ramp in his beautiful M500. Waiting for him was M600/SLS serial number 232, painted with stunning orange accents to match his company’s signature color. As both Executive Chairman and Chief Pilot of Tibbetts Lumber Co. LLC and Cox Lumber Ltd., he knows the right aircraft can elevate a business to the next level. However, after nearly two years with his M500, he chose the M600/SLS as the next step up for himself, his family, and his company for many reasons.

He values the industry leading payload and range the M600/SLS offers, and of course, the advanced G3000 avionics with Garmin Autoland for his family. However, his love of Piper Aircraft began long before he took delivery of his first turboprop.

“My love for aviation, and Piper Aircraft, dates back to the Fall of 1999 in Knoxville, Tennessee (KTYS) where I obtained my Private Pilot’s License in approximately 6 weeks at age 19 and proceeded to get all of my licenses and ratings up to and including CFI,” said Hooker, when asked about his aviation journey. “My grandfather, Linton N. Tibbetts, OBE, had an airline in the 70s called Red Carpet Airlines where he had a fleet of DC-3’s and Convairs flying mainly between Florida and the Cayman Islands, so aviation was in our blood! The flight school where I trained used an exclusively Piper fleet, so Piper was all I knew at the time and is still the manufacturer in which I have the most time, split between the Cherokee Warrior, Archer, Turbo Arrow, Seneca, Aztec, Navajo, Chieftain, and now the Meridian M500 and M600.”

Like many Piper owners, the aircraft flown by Hooker and Tibbetts served as a vessel of connecting over a shared love of aviation. To this day, Hooker holds the memories made in his first Piper close to his heart and has carried them with him as his aviation career expanded into the professional realm.

After a short stint as a professional pilot in the Cayman Islands, “from 2004 to mid-2021 I did not log a single hour of flight time as I was beginning a career in our family lumber and building materials business, starting a young family, and then building our new company, Tibbetts Lumber Co., from the ground up starting in 2009,” said Hooker. However, he never forgot his roots and experience in aviation. “In 2021, I realized that we had grown to a size and number of locations that we needed a better means of transportation to shuttle members of our team throughout the Southeast USA and for me commuting between Knoxville and Tampa/St. Pete on almost a weekly basis. Based on my own research and advice from other pilots and aircraft brokers, we selected a 2019 Piper M500 and I began flying that in July 2021.”

The M500 served Hooker and his company well over the years, but he quickly realized that his mission was expanding, and it was time for more performance from his aircraft. When he discovered the M600/SLS, he was immediately attracted to the ease of operation and similarities to the M500, with the increased performance capabilities as a result of the clean-sheet wing design that the M600/SLS is known for. The decision to upgrade quickly became clear, and Hooker’s dealer partner, Flightline Group, assisted him in a seamless transition to the new aircraft.

Once the M600/SLS was chosen as his next aircraft, the fun could begin—picking an exterior scheme and paint design. The decision was made to paint the aircraft with orange accents to pay homage to the striking company color for Tibbetts Lumber Co. After meeting with the Piper paint team, two custom colors were mixed to beautifully compliment the orange striping and accents.

When Hooker received the paint samples for his aircraft for the first time, he was shocked to find them named after his grandfather—Linton’s Grey and Tibbett’s Grey. Corbin Stephens, of the Piper Paint Line, personally mixed these two colors for this aircraft, making Hooker’s M600/SLS a truly one-of-a-kind piece of art.

It’s stories like this that remind all of us at Piper why we do what we do—creating the safest, most technologically advanced general aviation aircraft on the market today. It is exciting to see what customers like Kyle Hooker, his company, and his family use their incredible machines for, and how their aircraft can allow their companies to expand.

“Piper Aircraft has allowed our company to grow, and our executives to be home at night due to ease of travel,” said Hooker when asked how the addition of the M500 and now M600/SLS have impacted his life. “It’s clear to see the care that Piper builds its products with. Safety is first and foremost what Piper stands for along with quality, ease to fly, and just a superb product overall! We are excited to see what the future holds but Piper Aircraft will certainly play a huge role in our growth and our work quality of life!” 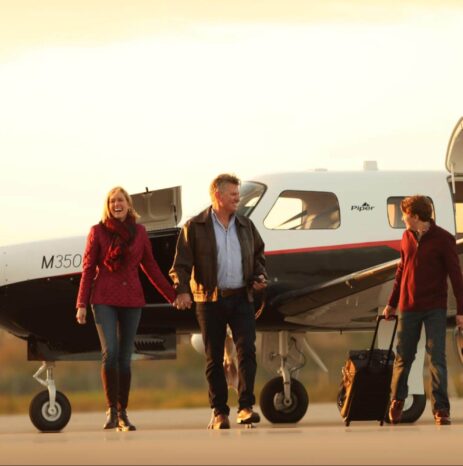 What You Need to Know About 100% Aircraft Bonus Depreciation

In 2017, the Tax Cuts and Jobs Act (TCJA) implemented a range of new tax policies, among which was a 100% bonus depreciation policy on certain assets including qualifying aircraft. This allows aircraft owners to deduct the total purchase expenses of their aircraft within the first year of operation, rather than in small amounts throughout…