This year (2022), Piper Aircraft is celebrating its 85th year of manufacturing quality aircraft for aviators worldwide. The Piper Aircraft company began its roots as the Taylor Aircraft, Co.in Bradford, PA. The Piper Aircraft Corporation was officially founded on November 1st, 1937 following William T. Piper’s, one of the heads of the Taylor Aircraft Company, purchase of the company shares of joint owner Gilbert Taylor. The newly renamed aircraft company immediately increased production and went on to lead innovation within the general aviation market with iconic products like the , the Piper Cub (not bolded) , which was introduced in 1938. The next eight decades would see Piper Aircraft endure triumph and tragedy, all while continuing to innovate and lead the general aviation market.

The Cub has a long and fascinating history, but its heyday came with the U.S. entry into World War II. By 1941, Piper Cubs accounted for more than 60% of U.S.-registered civilian light aircraft. Thousands of Cub variants, such as the L-4, were employed by the Armed Forces as reconnaissance, ambulance and supply transport aircraft. By the end of the war, ​​75% of all Civilian Pilot Training Program pilots had trained on a Piper Cub, and its popularity carried on into the late 40s and 50s as thousands of ex-military Cubs were re-registered as civilian aircraft by their enthusiastic pilots.

Cub fever continued with the launch of the Super Cub in 1949 — a light aircraft modeled after the original Cub design but outfitted with a more powerful engine, an electrical system and flaps. It was a popular craft for use in bush flying, agricultural work, banner and glider towing, and military operations. The Super Cub remained in production through the 1990s, with more than 10,000 aircraft built during its 40-year production run.

The next major addition to the Piper family was the PA-22 Tri-Pacer in 1951, featuring a shorter wingspan than its predecessors, as well as a control yoke rather than a center stick. A nosewheel, as opposed to a tailwheel landing gear, was added to the craft in an effort to create an easier, safer flying experience. The third wheel proved to be a popular addition, with the Tri-Pacer outselling its predecessor, the PA-20 Pacer, six to one.

In 1958, Piper launched the PA-24 Comanche — a low-wing, single engine, four-place aircraft. Together with the Twin Comanche (a twin-engine version first introduced in 1963), they made up the core of the Piper lineup until 1972.

By November of 1959, more than 50,000 Pipers had been produced and utilized in a wide range of industries. In order to meet larger production demand, Piper Aircraft opened an additional manufacturing and development facility that same year in Vero Beach, Florida, where Piper Aircraft is still headquartered today. The design team at Vero Beach’s first project became the PA-25 Pawnee, an agricultural aircraft that went into production at the Lock Haven plant in Pennsylvania in 1959.

Piper Aircraft’s first venture into twin-engine aircraft was the PA-23 Apache, launched in 1954. At the end of the decade, Piper would introduce a modified version of the Apache, the Aztec. In addition to a more powerful engine, the redesigned Aztec offered five-seat, and later six-seat, configurations, as opposed to the Apache’s four. Its spacious cabin and ability to haul large loads made it popular among private aviators.

In 1961, Piper introduced $5 trial flight lessons at its dealerships, making its aircraft even more accessible to amateur pilots. The same year saw the introduction of the PA-28 Cherokee, the ancestor of a number of other Piper general aviation craft, such as the Warrior, Dakota, Archer and Arrow.

The 1960s also saw the introduction of the PA-32 Cherokee Six in 1966 (a PA-28 derivative with a wider cabin and six seats) and the PA-31 Navajo in 1967, which was followed by the Chieftain and a pressurized version of the Navajo. The 60s proved fruitful for the Piper company, and by the end of the decade, Piper sales would exceed $100 million for the first time.

In 1972, tragedy struck when Hurricane Agnes flooded the original Lock Haven facility, effectively ending production of the Piper PA-24 Comanche, which had been among its most popular aircraft. While the Lock Haven facility would eventually recover and continue operating until 1984, 1972 also saw the opening of a new manufacturing facility in Lakeland, Florida.

In the 1980s, the Piper Aviation Museum was formed as a branch of the Lock Haven Hersey Historical Museum, preserving many of the artifacts of Piper’s early history. In 1984, the museum moved into the old Piper engineering building at Lock Haven.

While the Piper Aviation Museum worked to preserve Piper’s past, the company’s eyes were fixed firmly on the future, with the 125,000th Piper rolling off the production line in 1982. The PA-46 Malibu, the predecessor of the modern Piper M-Class, received its type certification in 1983. The Malibu Mirage went on to set many world speed records throughout the 80s, and the aircraft’s maneuverability, reduced fuel consumption and extended range made it popular for business and personal use.

The mid-1980s were a challenging time for American light aircraft manufacturers, as increasing product liability insurance premiums put a financial strain on Piper and its competitors. The company changed hands several times during this period, cutting prices and selling the Lakeland factory.

Piper reemerged with the launch of the Archer III in 1994, a four-place, fixed landing gear aircraft featuring a 180-horsepower engine. In 2000, the Piper Meridian — a turboprop version of the Malibu — received its certification. The Meridian would later see the addition of the Garmin G1000 avionics system in 2009, further increasing the ease of operation and safety features of the aircraft.

In 2015, Piper unveiled the M-Class: three top-of-the-line personal and business aircraft that elevated the Meridian designs. The M350, M500, and M600/SLS were designed to offer best-in-class performance and safety features. The M600/SLS became HALO certified in 2020 and was the first aircraft to market that was equipped and certified with Garmin Autoland, which would take over the operation and landing of the aircraft in the event of the pilot becoming incapacitated.

The 2020s have brought numerous milestones so far: the 5,000th Piper Archer was delivered in 2020, along with the first Pilot 100/100i, a value-priced trainer aircraft created with a focus on lowering acquisition and operating cost. The 1,000th Seminole was certified in the following year, and in 2022 Piper will celebrate the 85th anniversary of both the Cub and the company itself.

Thousands of enthusiasts and dedicated fans worldwide keep the Piper spirit alive and thriving, even more than 85 years after the Cub took its first flight. From 1937 to today, Piper Aircraft has continued to develop safer, faster and easier-to-operate aircraft for consumers across the globe.

Want to learn more about modern Piper Aircraft? Explore our current lineup and discover why generation after generation has fallen in love with Piper.

Attending EAA AirVenture this year? Be one of the first three people to find the answers to the questions below, and come visit us at booth #140 to win a prize! 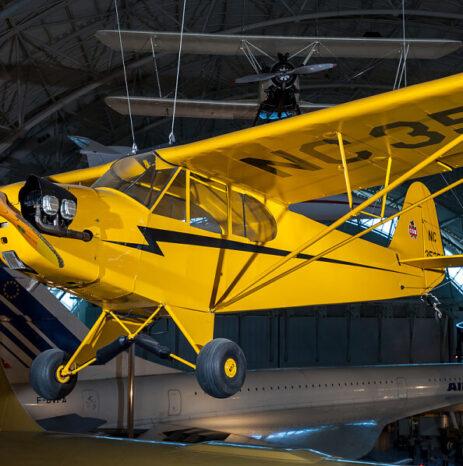 The Piper Cub: The History of an Aviation Icon

Even 85 years after its introduction, the Piper Cub remains one of the most influential and popular aircraft ever produced by Piper. This small, tandem two-seater airplane, simple in design and operation, is a favorite of vintage aviation enthusiasts worldwide. The ancestor to all Piper Cubs would undeniably be the Taylor E-2 model. Completed and…